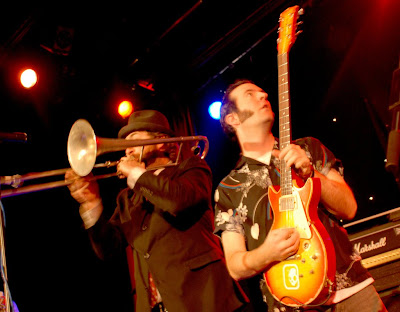 For many people, the OC conveys spoilt little rich kids in their parents Range Rovers driving to High School. But little would you expect one of America’s most renowned ska punk bands to hail from the same area. With a new album just released, Reel Big Fish have ventured into Cornwall to play Falmouth Princess Pavilions and by the sounds of it are more hyper and excitable than ever. If you grew up in the nineties and have never heard of Reel Big Fish, then frankly, where have you been?

Your new album is called “Fame, Fortune and Fornication”. How did you choose this name?
Aaron Barrett (lead singer): We’re a band that loves alliteration. We’re famous, we’re rich, and we like to fornicate. It just seemed fitting. We actually got it from the film ‘Still Crazy’, and I was watching it, and said to myself: ‘Oh my God, that’s the best name for an album ever.’ It’s perfect.


We don’t usually see you in Cornwall. How often have you toured the UK?
Ryland Steen (drums): We come to the UK every year, some times twice a year.
Aaron: I’d say we’ve been to the UK about ten times.
Ryland: We tend to do extensive tours when we come to the UK, and we hit everywhere we can.
Aaron: Even Wales.


With such an extensive tour, you spend a lot of time on the bus with each other. What’s it like?
Aaron: Just imagine a really small flat with ten dudes, sleeping in bunk beds and with one bathroom. Not nice.


How do you calm down after your energetic performances each night?
Ryland: We usually hang out on the tour bus, or go round to a bar. But during the day you can walk around and generally see where you’re at. Today actually I went up to the [Pendennis] Castle. It’s pretty cool. It’s £5 to get in though. But it’s worth it. It’s cool.
Aaron: I don’t care about the scenery. I just care about the people. I just want to see the people.


Some bands when they come over say that their British fans are more receptive to their music than back in the States. Is this true for you?
Aaron: Lots of bands like to kiss everybody’s ass. But you guys are awesome. America is awesome too. For us, we got lucky and got famous in the UK, because we were on TV and got a big push in magazines. I don’t know, you all just took a liking to us. The shows are really big and fun and you guys are loud and crazy, so we love you. You’re our kind of people. Even Wales.

Aaron, some say you like your death metal. Do you listen to that a lot?
Aaron: I really love Cannibal Corpse. And I would put Slipknot into the death metal category as well.
Ryland: Really?
Aaron: Yea, they’re more like pop-death metal though. If I could put Cannibal Corpse and Slipknot together and make one band, it would be beautiful. We played some festivals with Slipknot, and they kicked everyone out of backstage.


You tour for so long, and you’ll inevitably miss your families. But what does the UK offer that the States can’t?
Aaron: I’m on my first divorce. But I like getting kebabs here. We don’t have kebabs.
Ryland: Double-decker tour bus. We never get those in the US. There’s no Wagamama in the US either.
Aaron: Yea there is?
Ryland: Sure?


When you actually get any free time, what do you like to do?
Ryland: I like to play golf. And I hang out with my dog.
Aaron: Oh, really Rock and Roll!
Ryland: Well, I’ve been surfing once.


What are the songs that the fans demand you play at every gig?
Ryland: Beer and Take on Me.
Aaron: Sell Out people like, but it’s not as worldwide. It was our big hit in America, but it’s been over ten years since it was a hit. So if we didn’t play Sell Out, it really wouldn’t matter. If we didn’t play Beer there would be a riot.


What’s next for Reel Big Fish?
Ryland: Reel Big Fish is always going to be touring and writing songs. So we’ll just keep doing what we’re doing. I think a goal for this year is to get a new record out. That’s our goal.
Aaron: He’s the straight man, giving all the answers.
Ryland: One of us has got to do it.
Aaron: I don’t care what you say, I’m hilarious.

Fortune, Fame and Fornication is available to buy in shops and for download now. To see the band’s further tour dates, visit their site www.reel-big-fish.com.