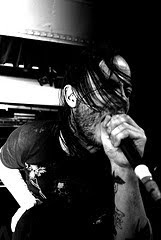 With perhaps the sweetest name in the business and more facial hairs than we’d care to count, Mike and Jaye from Cancer Bats stopped to chat about Sting, trannys and ‘weird hangy bits’...

The name Cancer Bats was thought up by putting a disease and an animal together. If Cancer Bats was taken, what would you have gone for? You can’t say Eczema Mackerels or Gout Weasels. They’re our suggestions.
Mike: We had to choose between our name and ‘Pneumonia Hawk’, which we later decided to call one of our songs instead.
Jaye: There’s this band in Montréal called AIDS Wolf; I thought that was a pretty abrasive name. Liam [lead vocals] nicked their idea. They’re like weird, arty, indie rock stuff.

The next album is going to be called Bears, Mayors, Scraps and Bones. Was there some formula for picking that name too?
Mike: Ah, that’s a secret.

Really?
Mike: Put it this way, I am the bear; Jaye is the bone, Jaye-Bone Malone; Liam is Scrappy or Le Scrap; and Scott [hairy guitarist] is the Mayor of 'Scoeb City', so, yea. It came to Liam in a dream.
Jaye: Yea, it came to him when we were all trying to figure out what to call it, and he came to us saying “What if it’s just all our nicknames?”. It kinda just flows. It’s totally ridiculous at the same time.

In the video for Hail Destroyer you have some gnarly looking wolves trotting around all over the set. Did anyone get bitten/maimed/digested?
Mike: One of the camera guys got jumped by a wolf. It didn’t bite him, but it cracked him in the face and he started bleeding so he had to go to the hospital. He was back in the afternoon after some stitches though.
Later in the video one seems to want to eat Liam’s face, and gets pretty close...
Mike: Yea, erm, there’s some camera magic going on there. That wolf that jumped hated this other wolf, and the handlers brought them close together and they got insanely vicious.

You all appear in Bring Me The Horizon’s video for Chelsea Smile. How did you manage that?
Mike: We were just in town and BMTH said they’d love us to be in their video. We just said “fuck it”; it was only a two hour drive and we went down for the morning, hoping for some sweet catering. And yea, there was no catering.
Jaye: And we look like the most boring dudes in that video too. They shot our part early on because we had to sound-check our show in London, so we didn’t get to be in the party parts. But by like 11.30am I was like, “I’m drunk”. It was real early.

So what’s with the beards? Who started the cornflake catcher revolution? Even Sting is looking like an extra out of some Jesus-based movie...
Jaye: Scott has had a beard since he was like, ten. And I hate shaving, which is good because we get a lot of compliments about them from people.
Mike: In hockey during the play-offs everyone grows their beards, it’s just a thing the players do, and we all wanted play-off beards. But Liam’s, his was so gross. He gets weird hangy bits. So gross.

What’s this I hear about a Beastie Boys cover?
Mike: Yea, that is recorded. But it won’t be on the new album. Hopefully it’s gonna come out as a seven-inch before the record, but don’t hold me to that.

Did you guys get up to anything on Halloween?
Jaye: We played a special show in Nottingham, at Rock City. Mike dressed up as some sort of tranny.
Mike: Nah, I was a zombie-tranny. Scott went as a Viking but I don’t really count that as dressing up. He just put on the clothes that he should normally wear.

Finally, why should everyone buy your new album next year?
Jaye: Because it rules.
Mike: It’ll rock your balls off.