On a knife's edge

This piece was written as a module final for my degree in journalism. The illustration I commissioned is by Phill Myatt. It is written in the style of Vice Magazine. 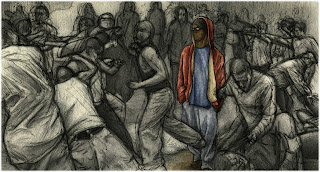 I’ve led a pretty sheltered life down in the countryside. I’ve been up to the city a few times, but never had any trouble with crime. I’m sure it’s out there, but it’s just not found me. Yet.

I rely on the news, films and rap music to grind down my perception of a safe environment. I’d be pretty naïve about coming across a group of grimy teens with caps down and neckerchiefs up on a street corner. Part of me would tell me to bolt, but the other half would tell me to walk on, stay cool, and don’t look them in the eye. Actually, I wouldn’t have a clue what to do.

Jack Jordan and I are polar opposites. Falling asleep and waking up to a lullaby of sirens is standard in Vineland, New Jersey where he was brought up. Stories he tells read like a Scorsese film. Police shootings, stabbings and drug deals in school are a staple diet that he’s been force-fed all his childhood.

Being immersed in criminal activity carries its disadvantages. Being banged up or killed are just a few of them. But Jack would know what to do with that group of grimy teens. I asked him whether growing up looking over your shoulder has given him the life-skills to save his skin elsewhere, and if he’d change a thing.

Vice: Tell me about your hometown. What was the atmosphere like?
Jack Jordan: I lived about 30 minutes outside of Philly. The area that my house was in was fine. It was a white, middle class area. But my high school and town wasn’t so great. There’s a lot of immigration with Puerto Ricans and Mexicans and they really don’t get on. Most are illegal, and it’s got pretty bad seeing as they can shoot up a place or rob it and just jump on a plane home. These race feuds carry on in the schools too. There was a month-long ‘war’ between the PR’s and the blacks with bats, knuckle-dusters and a couple of guns found in lockers. That’s the worst the atmosphere has been. It all started when I was a freshman, and a black friend’s older brother got shot by the PR’s at the movies. School got so bad that at one point there were always 2 or 3 policemen in each building strapped with a gun and club. Everyone was on edge.

How often does shit like that happen?
There’s an occasional murder here and there, but not as bad as in a ghetto, say, like in Compton. Drugs busts are high. Kids were always selling weed and other stuff in school. I was never dumb enough to buy pot in school, but drugs were everywhere. I could’ve got you anything from pot to heroin, coke to crystal meth within a few phone calls. All that kinda died down after 10th grade, because a lot of scumbags dropped out. The dropout rate was real high, like 40%.

Is it just the kids that are crazy?
No way. Philly is renowned for having the most brutal sports fans for any event. When they won the World Series I literally walked into a full-on riot. Bottles were flying everywhere, teargas was spewing all over the place and the riot police came in on a school-bus, sat two-by-two. I saw one guy get knocked sparko by a billy-club, and some chick get her head split by a flying bottle. Cars were being flipped and lampposts were pushed horizontal. The people from around there are nuts, and I never realised just how nuts until I moved away to Uni.

What do the cops do? Is anyone afraid of them?
I wouldn’t say they’re not afraid. It’s more to do with the kids getting so used to the way of life that they just couldn’t care less. The cops do what they need to do, in most cases. A friend of a friend the other night just totally lost it and murdered his grandma with a baseball bat. He was a loose cannon, man. The cops had to gun him down. But there are a lot of officers who are just dicks. I met this cop on a night out who said he’d go to a bar, drink with a Mexican guy and get him all fucked up. When he’d leave to drive home, they’d pull him for DUI. Most of the police that I know aren’t the most educated guys, but some are just plain corrupt.

How do you avoid getting caught up in all of it?
It’s easy to avoid, and easy to get caught up in. That was the only positive about the situation: you had the choice. But trouble is there if you want it. Most of the safe parties we went to would get a bit shady when the big-time dealers would roll up. You could sense shit would hit the fan, so you’d leave or ride it out.

You seem like you’d take the former option of sensing it and getting out. You’ve travelled to loads of places, so has this ‘sense’ helped you stay away from trouble in other countries?
I reckon I’ve learnt to adapt to my environment pretty well. Most of the time I can tell five minutes before something’s going to kick off, whether it’s body language or what have you. I don’t tend to get caught off-guard because I know how important it is to be aware of what’s going on around you.

Have you ever had to act on these instincts during your travels?
I studied in London for a few years, in an area prevalent with gangs. I saw these four guys in a street, two on each side, talking to each other. I could tell something was going to spark up. It did. One dude crossed the road and just cracked a guy square in the face, and I ran in and grabbed him to stop him from probably knocking the other dude out. His mate ran off, and when I let go he legged it too. If I hadn’t understood that something was going to happen, I would have been caught up in it for sure.

How much do you owe to your hometown for helping you stay away from violent situations?
A lot. There were a few parties back home that I’ve just left because it was getting too much in there. Not many other places are so violent that you think have to leave to save yourself from getting hurt, or even to save your own life. The problem is the kids who number up and get all brave. That’s when people get hurt. At my graduation after-party two crack head brothers got stabbed, one in the ribs and the other in the neck, and got airlifted out. I was glad I decided to go before. As I said, you have the choice to leave or stick around to get involved.

If you could, would you choose to grow up somewhere else other than Vineland, NJ?
No way. I’ve learnt so much about a wide array of people and cultures. It’s made me aware of myself in my surroundings, which definitely comes in handy for someone who’s travelled, and is gonna do a lot more in the future.
The names in this article have been changed.
Posted by chris_sayer at 03:46