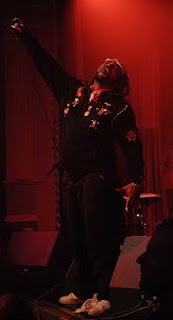 Skindred are different. Very different. In fact, there’s nobody else out there like them. Their reggae-come-dance-come-metal-come-rap could easily have been a case of ‘bitten off more than you can chew’. Maybe for us mere mortals, but for Benji Webbe and his crew the sound is as brilliant as it is distinct.

YouTube videos reveal their recent Sonisphere festival slot to have been little short of epic. If Falmouth could match even a slice of that, then this gig was going to be electric.

Karnivool, blending a twist of A Perfect Circle and Sense Field, were first to play. Like an extra from One Flew Over The Cuckoo’s Nest, Lead singer Ian Kenny’s dorky and dumb stage presence was irritating to begin with, but slowly fitted into the eerie melodies and catchy riffs that also makes his sideline band Birds of Tokyo so popular. With an album definitely worth a listen set for release in the UK soon, the Aussies’ really set the standards from the off.

However, the second support slot fell to Dead By April. Frankly, if there is a book on how to be a whiney, wet emo band then this lot have read it. Several times. Maybe even listened to the audio books. Nevertheless the masses of black-clad adolescents seemed to love the Scandinavian group, and that’s who they were there to play to.

Finally, and luckily, it was Skindred’s turn to boss the stage. And boss it they did. Benji Webbe, the only Welsh-Rastafarian lead singer in the business, instantly charged the audience with his spiky machine-gun reggae rap, skewed with the booming jaws of a metal growl. This Jekyll/Hyde effect stirred up the near sold out audience with everyone bouncing unanimously to every beat of every song.

Songs such as ‘Rat Race’, ‘Pressure’ and ‘Nobody’ were crowd favourites, as well as the cover of Eddie Grant’s ‘Electric Avenue’ which the front-man seemed to take particular pleasure in reciting.

Unfortunately, the encore was cut short after bouncers struggled to restrain one martyr/fool, who went against everything Benji had said during the evening. With a simple “Right, thank you, goodnight” they were off the stage and the lights were up.

That aside, it’s a wonder why this band isn’t a huge British sensation. The only similarities that can be drawn with other bands are in The Prodigy and Pendulum, who also cross genres and appeal to huge numbers with enormous success.

Maybe it’s a good thing that Skindred aren’t radio regulars for now. Falmouth could do with more nights like this on a regular basis. And there is only one band that can do it. (Chris Sayer)