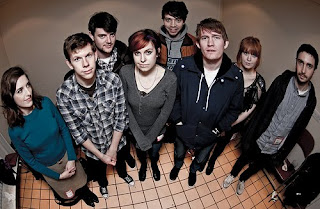 
Super wicked indy-pop rabble Los Campesinos! are one of the few bands that can cheer us up no matter what. Just the other day, we cracked out their fine new album “Romance is Dead” when we found out that you can’t cook popcorn in a kettle. We caught up with Gareth and Neil to say cheers...

Hola Los Campesinos! How y’all doing?
N: Feeling really good! We played London last night, and it went amazingly well.
G: Yea, we were stressing about it because it’s such a big gig, but now it’s over we can kinda relax a bit. Gigs like that justify why we dick around in a band instead of doing something more worthwhile.

So there’s a butt-load of you all, do you have a collective term? Like a gaggle of geese, or tit-load of lobsters...
N: A hunk of shit?
G: Or a collection of morons? We’re up to eight now. The closer we can get to being a football team the better really. That’s where we’re headed.

Is it true that you’re the “second most punk band in the UK”?
N: No. We’re the first now.
G: We were in second place when The Gallows were being touted as ‘the most punk band to have ever existed’. We didn’t want to challenge that, so we settled for second. There’s less pressure in second place.
N: But now they’ve done some record of ballads, so we’ve leap-frogged them.

While you’ve been acting like true Punksters has anyone taken the song title Death to Los Campesinos! literally?
N: You got you’re head caught in an elevator the other night? That was the closest we’ve got to death for a few nights.
G: I didn’t realise just how stupid that idea was. In fancy lifts the doors can sense movement, right? But this was in some shopping centre in Aberdeen, and I was being a moron and stuck my head in. For the rest of the evening I was out of it. Could’ve been a cracking way to go though.

Your twitter status this recently said that FRONT is your lad’s mag of choice, but there’s no wanking in the van. Cheers for that, but are there any other rules of the road?
G: It is! It’s our tour mag. We spent the last week stopping at petrol stations seeing if the new issue was out. The Workie Challenges fill me with fear, man.
N: As for rules, we basically never leave anything from the rider behind, hence why we have a crate of Carling in the van. If it’s free, we’re having it.
G: There isn’t much crazy stuff that goes on though, to be honest. We go to bed early and respect our elders, I think.

You don’t live up to your “Most Punk Band in the UK” title really...
G: Yea but who defines the word ‘punk’?
N: The Gallows do. You’ve got one of the band in your mag this month with his tats, right?

We do indeed...
N: You should see our merch guy, Jason from The Ghost Frequency. He’ll beat that guy any day, he’s covered. You should get him in. He’d be well up for that.

Er, maybe. Who gets more fan attention in the band: the guys or your lovely lovely girls?
G: The girls. To a lot of people they are still a novelty. There’s something really attractive about attractive girls on stage. I’m jealous if anything that we don’t get similar attention.
N: You’ve had some attention, Gareth. We did the Irish version of Jonathon Ross once, with Louis Walsh, Donal Macintyre and Sonia from Eastenders. She was hammered, and asked him for his phone number.
G: I’ve lost that phone since. Oh well.

Shame that. Finally, why should everyone buy your new album “Romance is Dead”?
N: Erm, so I can eat dinner?
G: I was offended by our album review in FRONT. You called me ‘The Duke of Fancytown’. I’m from Somerset, so how can be posh?