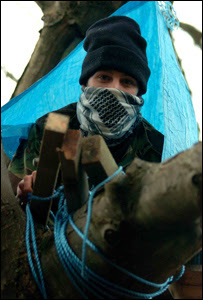 Protesters are demonstrating today to prevent the demolition of a copse despite a court order to remove them.

Supermarket chain Megabuck plans flatten the wooded area in Moonville, Wishingshire, to make way for 70 homes, shops, a restaurant and a petrol station, as well as the supermarkets car park.

The felling was meant to have begun this morning, but was foiled by the twenty conservationists who have set up their tarpaulin homes in the canopies of the copse.

Joseph Bloggs, 24, the initiator of the protest has braved snow and his vertigo for the last two weeks to prevent to plans from succeeding:

“I have been here for two weeks and I am not going anywhere. They will have to drag us from these braches.”

Older residents are also upset with the proposal, as the town’s war memorial would have to be relocated to make way for a road to accommodate for heavy goods traffic to the supermarket.

However, some residents have welcomed the idea, as it would tidy up the area and provide better services for locals:

“A new store would be fantastic for the town: more jobs, more business. Anything has to be better than staring at this old dump.” said resident Toby Gunn, 65.

A Megabuck spokeswoman would not comment on the fate of the protesters, or when an eviction attempt would be made, but announced that they “intend to replace the trees that are cut down”.

The company owns an estimated 180 other sites nationwide for development of their stores.

Straight forward intro; answering the “who and why” questions, but not “where, when and how”

Maybe swop over paragraph 2 and 3, as the second paragraph is more relevant towards the intro and the “news” in the story.

Like how you included views from the residents, to tell both sides of the stories.
You also included comment from spokesperson, making the story “fair”.
Like the ending, nice way to round of the story.